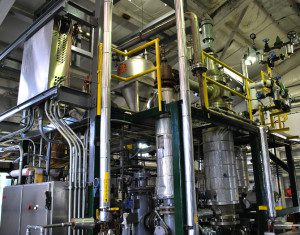 Where fraction is not required, thin film distillation is typically preferred for its high evaporation rate and shorter residence time resulting in less heat history. The process is also referred to as wiped film distillation. Along with a short residence time, this process offers low pressure drop configuration to enable the reliable and continuous processing of heat-sensitive, fouling or viscous materials without causing degradation.

Temperature-sensitive substances of the crude mixture can be both the low and high boiling point component in a mixture. Thin film distillation was developed to provide low evaporation temperatures, low vacuum and thus minimize residence time in the evaporator.

Wiped film distillation is a solution that creates a thin film of a liquid on a vertical evaporator’s inner surface generated by a wiper system. As the wiper rotates, down-flowing liquid is equally distributed to feed on the wall’s inner side. Typically a film is 0.1 to 0.5mm thick, and the thickness will depend on the liquid’s viscosity, liquid throughput, rotating speed, and the wiper system. The thin film has nearly no hydrostatic pressure, no concentration profile, no temperature gradient, and minimum hold-up as the result of high-quality radial mixing.

Thin film distillation offers an opportunity to reduce operating temperatures and pressures resulting in higher evaporation rates and  shortens residence time at temperature. This creates higher-quality temperature-sensitive products. Reputable chemical contractors like InChem follow a multi-step operation that is efficient at concentrating, purifying, and separating a wide  array of  chemical substances such as oils (essential, mineral, herbal), pesticides, and fragrances.