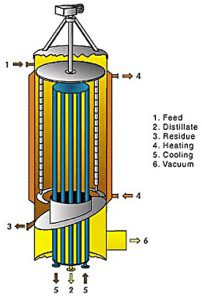 Short path evaporators can operate as low as 0.001 mbar, as opposed to conventional wiped film evaporators, which can only be used down to 1 mbar. This reduces the operating temperature in a short path evaporator, thus limiting the heat history and preventing thermal decomposition of products.

To learn more about how InChem can meet your short-path distillation needs, use our online contact form or call 1-800-331-7721.